Contest description
This year we present you the summer contest of multiple genres. It’s a contest for individual participants but with some element of teamwork. Each participant is to create one single video in one of four proposed categories.

1) Psychedelic. Videos of this genre are built upon unobvious logic and abstractly connected images, arranged by author so as to illustrate and communicate some idea or show a specific mental state. Psychedelic videos usually do not have a clear storyline. Examples: Outside Of Consciousnesses, Tomorrow Never Ends, Meimoo, videos of site category Psychedelic.

2) Comedy/Fun – works of this genre include funny, humorous, hilarious videos. It doesn’t matter how exactly you make the viewer laugh – by jocking, parodying, making something silly ar absurd or in some other way. Examples: videos of site category Comedy/Fun

3) No Effects – in this case your goal is to create a video without any special effects. “Special effects” include any changes which make the original source look different (including masking, color correction, etc.).

You are allowed to:
1. Use no more than two video layers at a time
2. Use only frames from video source or color solids
3. Use overlay with any opacity. You can change the opacity level both non-linear and linear.
4. Resize/change position of any layer. Use linear change only
5. Flip frames horizontally and vertically
6. Use time stretch (both to speed up and slow down the motion), time reverse and stills
7. Use default blending modes only (frame blending and pixel blending)
8. Use Tint effect (or its analogs) for color correction. Any opacity level allowed.

Anything that is not in this list is prohibited for videos in no-effects category.
Absolutely not allowed:
1. Effects (except for Tint)
2. Non-rectangle and animated masks

No restrictions on credits design

4) Requestor – each AMVNews user with history can propose three music compositions he/she would like to see in an AMV.List of proposed tracks. AMVNews administration forms the final list of tracks from all propositions, and the contest participants should make an AMV using one of the tracks from the final list. 25% of money won in this category shall be given to user who proposed the winning composition. You can edit (shorten) the chosen track. You can not use self-proposed composition.

When submitting your video you should choose one single category. Even if your video fits two or more categories you still have to indicate only one when uploading your work. There will be overall ranking as well as four category rankings with prizes for winners in each of the categories.
It is possible to participate in a team of four, thus a team should present four videos in all proposed categories. There will be a special team ranking.

Contest video can be made either of anime movies, anime series and Japanese videogames or of manga, arts can also be used, including author’s arts. Other footage can be used if it takes no more than 50% of the video. No restrictions on music styles. We accept exclusive videos only, the ones which were created specialy for the contest and premiered online after July 20th, 2013. The length of contest video may not be less than 60 seconds (without credits). The contest title (AMV News: Mix Con 2013) must be mentioned in the video, how exactly to mention is to participant's choice. A line in credits should be enough.

A video won’t be accepted, if:

1) It does not correspond to its category
2) It contains unknown music/video source or plagiarism
3) There are significant compression artefacts
4) Footage is of poor quality
5) TV resolution of full version is far too low (320х240 or 352х288)
6) There are hard subtitles not justified by artistic intent.
7)  Broken aspect ratio  or  interlace  is visible in most parts of the video.
8)There are black bars on the top and bottom of the video (if those are not used in any way during the screening).
9) There are violations of Russian Federation legislation, in particular concerning the incitement of ethnic hatred, or pornographic materials.

Voting and judges
There will be two round of voting. All participants can take part in the voting (it is forbidden to vote for your own video) + invited judges from among well-known creators and active commentators.

It is recommended to encode with AMVSimpleGUI or MeGUI, see the following articles:

- Full version is to be compressed at the rate of no more than 25 MB per minute of the video, no more than 50 MB per minute in case of HD-version. If you wish to extend the limit, you must send a request to administration explaining why the extension is needed.
- If you submit an HD-version of the video, it is suggested to add a standard definition version as well.
- Preview version: file size at the rate of exactly 4 MB per minute; resolution width 480 pixels. Encoding combination x264+AAC+MP4 via AMVSimpleGUI is highly recommended! This is the only way we guarantee that the online preview will be available for your video, as well as the best quality of the picture.

Prize fund
A prize of 2000 roubles shall be given to winners in each category, as well as to the winning team in case there is two or more teams. In addition each winner shall recieve a diploma.

Registration for MixCon 2013
List of registered participants of MixCon 2013

Registration is opened till the 20th of August.

How to enter your video:

1)Videos can be submitted from July 20th through August 20th, 2013, by registered contestants only.
2)Fill in the application form located here: http://amvnews.ru/index.php?go=Files&file=add
3)You should indicate the contest category of your work in description field.
Choose "Mix Con 2013" as one of the categories. Make sure there was the website message "Thank you, your video has been added successfully" after the upload. Here you can see whether your video was added to the list for moderatorial check. Then you’ll either wait to see the video on site or you’ll get a private message from administrator requesting to correct the deficiencies found during the check. If any questions arise, contact the administrator via the private message.

1) You can sign up as a judge via special application form on site.
2) Entry application for a judge can be submitted up to the beginning of the vote.
3) A user can only be accepted as a judge either if he/she comments actively and in detail on contest videos or if he/she has authority within AMV community (on condition that he/she will watch the required amount of videos).
4) Any judge can be disqualified before the vote begins without giving reasons

Note 1. Each video participates in voting by categories only in accordance with the category which was indicated in the submission form.
Note 2. *The nomination is considered valid if two or more teams take part in the contest. There will be no special voting for best team: points scored by individual participants in four categories will be summed up to get the team’s rating

Nota Bene
Contest organizers reserve the right to change the contest date, as well as to change/add some details owing to unforeseen circumstances. 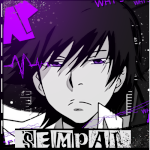 -Azumanga Daioh- wrote:You have a swimsuit tan. You could jump in the pool naked and no one would know you weren't wearing anything.